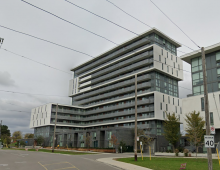 160 Flemington Rd is rent controlled. Doug Ford made it such that any building built after 2018 November 15th was not rent controlled. Landlords are abusing this. Eviction itself is violence, and they will use that fear against you. Here is my story, and my proof.
Tags
landlord
life
money
renters
tenants

Much of the reason that deep learning has become popular and successful in recent years is the availability of vector processing with flexible GPU compute. As a Machine Learning Research Group we utilize GPU acceleration to conduct all of our experiments. As a part of the Tutorials for the Canada-France-Iceland Workshop on Machine Learning and Computer Vision we needed a GPU accelerated environment that could be used by 50 or more people.

Raspberry Pi: Connecting to WiFi at University of Guelph

This post provides very simple instructions for connecting to the uog-wifi-secure network at University of Guelph (specifically proven working in 2018). These instructions can likely be adapted to any WPA-enterprise network utilizing EAP-PEAP (MSCHAPv2) and any device using wpa_supplicant. From raspbian you can edit two files, /etc/network/interfaces (to enable our interfaces, i.e. turn them on) and /etc/wpa_supplicant/wpa_supplicant.conf (for entering the required parameters).

PDF Download. Abstract: Patient tracking is an important component toward creating smart cities. In this demo we use Bluetooth Low Energy beacons and single board computers to track patients in the emerging field of smart care facilities. Our model utilizes fixed scanner moving transmitter method for wireless tracking of patients through the facility. The data collected by all scanners is stored within a central database that is designed to be efficiently queried. We show how inexpensive components in conjunction with free software can be used to implement a patient tracking system. We focus on the pipeline between acquisition and display of the location data. Additionally, we also discuss the manipulation of the data required for usability, and possible filtering that improve accuracy.
Tags
Academia
Paper
IEEE

If you haven't been on the internet or watching the news in some time you may not have heard of Bash for Windows, or perhaps more correctly, Windows Subsystem for Linux. This tool is ground breaking for Microsoft not because it lets you use the bash (bourne again shell) but rather that it lets you run native Linux binaries on a Windows operating system. Many tech reporters are missing the point of WSL's utility.
Tags
Technology
Windows
Linux
WSL
Performance

Why I won't be playing Pokémon Go: At least for now

Pokémon Go was released on July 6th, and in Canada has July 17th. Before it was released in Canada I was attempting to find ways to trick the Play Store in order to get it early. If you search for these type of region bypasses on popular search engines you get links to sites with sketchy downloads of Android apks. I eventually gave up trying to get it from the official Play Store while a huge number of Canadians already found ways of getting it.

To the point. I will not be playing Pokémon Go now that it is available in Canada. I provide the following reasons.

Graduate from first year, stop doing the work for the computer
Computers are really good at doing repetitive tasks so lets address some of the time saving and more professional ways of writing code

Some of the people in our department will disagree with some of my decisions here but I'm choosing these based on platform independence, wide spread use, and potential. The idea of this section is to get you into self learning in computer science. Self learning is probably one of the fundamental concepts in industry. With the competition among top performers in industry if you do not learn to self learn but still get good grades you will probably do well, but if you really want to be the best of the best you need to self learn.

As an introduction I would like to assert that nothing said in this post covers all situations and view points that are present. The topics presented are what advice I can draw from personal experience as a Helpdesk TA and with discussions with other upper year students. The list is ordered in my order of importance.